Yugogeer012
EpicTale is a comic AU created by Yugogeer on Tumblr, was owned by Timeless Dubs for a time, but has been reclaimed by Yugogeer as of June 2019.[1]

Chara wondered why their soul was colorless. It took time for Chara to realize why their soul was different. They started acting unusual, which led to them harming Asgore and everybody else. Undyne attempted to stop Chara, while everybody evacuated the battleground. Sans eventually took over after Undyne did the best she could to defeat them.

Turns out Chara was being possessed and influenced and Sans realizing this meets Frisk, a version that controls six other human souls when he goes looking for Chara who is with Asriel. Turns out Frisk lured them there in a petty revenge plot for an alternate reality wrong caused them by the Dreemer family.

The first stage of the comic ends with the erasure of the monster kingdom at the hands of Frisk. Frisk Resets after killing both Asriel and Chara and the second arc of the comic starts with a redesigned and perhaps younger Sans meeting a naive alternate Frisk.

According to the remake Yugo is making, the first comic is no longer canon due to a full reset taking place.[2]

The new rendition begins with Frisk's fall into the underground with a still alive though younger Chara and Asriel living a peaceful life with the Dreemer family. They are taken in and adopted by the king and queen before having their soul ripped out by Gaster who wishes to use their power to wipe out humanity.

Sans (he calls himself Epic!Sans) has some changes in his behavior. Also, he isn't lazy, and always keeps his promises. He is Asgore's childhood friend, and It's insinuated he got Tori and Asgore together because he's referred to as the king's wingman. He likes to say Bruh often, sometimes replacing words with with it and generally acts like an anime obsessed nerd similar to Alphys. Going so far as to give himself the title of Epic!Sans. He tends to be a huge flirt to anyone he finds cute and has a cookie addiction. Whenever he's around his best friend Cross he often engages in meme related antics. He can be serious and shows an unexpected maturity when doing so even though he still uses his favorite phrase. Often times the left socket where his scar is will be empty, a purple eyelight only spawning when he's emotionally high strung or intimidating. In the original rendition and first season he is 43 and then 45 after the reset. In the remake (post full reset) Yugo has stated he is 29.[3] He is the royal scientist and is the boss of Mettaton and Alphys.

Gaster is Sans and Papyrus's father in this AU. Upon his return to life after being destroyed by Frisk's determination 6 years prior he no longer has his abilities like he once had, only Frisk's power. [4]

In this AU, Red is present, a fan character created by Taxiderby . In this AU, she is called Lara and she is Mettaton's cousin. It seems that Lara has a crush for Papyrus.

Chara is 10 and Asriel is 9 in the first rendition but are both 10 in the remake[5]. Both of them wear a kind of royal outfit instead of classic striped shirts. Though the outfits have been changed back to the default in the remake.

Paci!Frisk, previously 8 but now 11, was the second human to fall into the Underground in the original rendition of Epictale. However they're the first in the remake. They dislike violence and enjoy hugs. They like making friends, flirting and anything sweet. Their magic is some kind of Defense Type.

Undyne has yellow spears instead of cyan/light blue.

Mettaton is the scientist besides Alphys and Sans. In Epictale, Mettaton is a she in the original comic but has had a gender change to male for the remake. His behavior is serious and he seems to enjoy children's company. He dislikes Sans' behavior the majority of the time. He also has a Neo form, when he takes off his glasses.However his box form is a heart monitor.[6]

Napstablook is an assistant of Mettaton's, Alphys and Sans.

In the official Epic!Muffet reference, it's shown that she has a creepy side.

Neutral Frisk and the other human souls that accompany them isn't from this AU originally, revealing that in their conflict with Sans. They are the main antagonist for the original rendition of Epictale. However it appears they will not be making a return as confirmed by Yugo.[7] 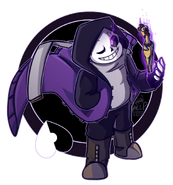