Asriel (Before he died)

Your Best Nightmare
Finale
You Idiot

God of Hyperdeath and Angel of Death:
Invincibility

Prince of the Monsters (formerly, before his death)

Chaotic evildoer (currently; formerly if redeemed at the end of the Pacifist Route)

Reliving and undoing the events of the Underground around him

Tormenting other beings
Taunting the protagonist

Flowey is the first major character that the protagonist encounters in Undertale.

Flowey serves as the main antagonist for the majority of the game, specifically the Neutral and True Pacifist routes, and can be considered a deuteragonist for the Genocide Route.

He provides an introduction to the mechanics of encounters by sharing "friendliness pellets," which are actually harmful bullets, revealing his philosophy of "KILL or BE KILLED."

He has the Empty One role.

Flowey has a malevolent and cruel disposition, berating the protagonist for not following his "kill or be killed" philosophy. Despite this, he also criticizes the protagonist at the end of the Ruins if they killed any monster. He is a greedy, arrogant, egocentric, manipulative, devious, sly, and cunning planner, who is subtle if the circumstances require it. He retains his memories between SAVEs because he was once able to SAVE. He is also shown to be extremely solicitous, pusillanimous, diffident, and cowardly, as he kills his former father to appease the protagonist in a vain attempt to save his own life in the Genocide Route's conclusion.

Before his death, Asriel was a docile, unadventurous and loving child. He cared for the First Human as a sibling, and he trusted them when they came up with a plan to escape the Underground that involved them consuming buttercups.

After Alphys  resurrects him without a SOUL as Flowey, Asriel becomes incapable of feeling love. This makes him bored and resentful.

After temporarily regaining his compassion, he apologizes for his actions to Frisk and realizes the gravity of his actions as a flower.

Much like his father, Asriel has taken his bad naming skills, as Asgore calls his new home "New Home", Asriel literally calls his flower form "Flowey", which is just "Flower" with the R replaced with a Y.

Flowey usually appears as a sentient, grinning golden flower with a white androecium, six yellow petals, and a light green stem. He can contort his face into a variety of expressions and mimic the faces and voices of other characters. He mimics Toriel and Asgore in some situations, as well as his old self at the end of the Genocide Route. He also mimics the protagonist's face before the Neutral Route's final battle.

After absorbing the human SOULs, Flowey transforms into a grotesque, flower-shaped hybrid of plant tissue, human organs, and machinery. Consisting entirely of rendered images, Photoshop Flowey is stylistically different from anything else in the game.

He has two sideways jaws, with tiny lumps on the end, and has two orifices that resemble nostrils, as well as an eye on each side with moving and pulsating irises, located within hollowed mouths. On top of his "face", he has a box TV that switches between a smiling face with huge teeth and sideways eyes that flash red and green. It will also flash vague, distorted black and white images of a terrified human face. The bottom of the mouth can overlap the TV's frame. He has metal, bumpy pipes that resemble petals and connect to the television and the jaws of his "face".

These jaws have floating eyes with moving and pulsating irises. He has many tubes that exit behind his monstrous form, and big, thick vines that move away from him. He has cactus-like arms with red claws and dangling vines with leaves on them. His hands have the ability to retract and transform into Venus Flytraps.

Photoshop Flowey's new body resembles that of the DT Extraction Machine's structure, albeit now filled with teeth, gums, and eyeballs. Alphys used this machine to extract Determination from six previously captured human SOULs - the same SOULs that Photoshop Flowey uses to power himself.

Similar to Toriel and Asgore, Asriel is a goat with long ears, a snout, and visible fangs. In his initial form, he wears a green, long-sleeved shirt with yellow stripes and black pants, similar to the First Human's clothing. He also has a small wisp of fur on his head and lacks horns.

This form is named directly in the game, where the "Check" option labels Asriel as "the absolute GOD of Hyperdeath!" The sclerae of his eyes become black, his fangs become longer, and he has a pair of horns. He wears a long dark robe with white sleeves and the Delta Rune on the front, with a large collar and shoulder pads. This robe is similar to Toriel's. He also wears a locket similar to the Heart Locket.

Asriel's body becomes more geometric, his horns are longer, and his teeth get sharper. He has a pair of wings that continuously change color, and his lower body becomes sharp and heart-shaped.

While this form is not directly named, it resembles the Delta Rune, which looks like the "Angel of Death" from the prophecy. 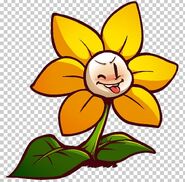 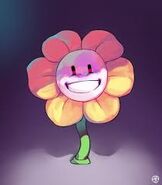 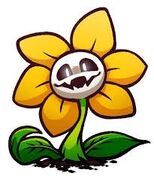