735q4e87 Wiki
Register
Don't have an account?
Sign In
Advertisement
in: Pages without a standard infobox, Articles that need to be improved, Frisk,
and 6 more

Young one (by Sin)

Crush on Sans (In Pacifist)

Frisk is the Main Protagonist of Negatale in Pacifist, but is the Antagonist (Not main) in Genocide Route.

They are slightly less determined than in Undertale, though still determined enough to want to stop Asgore and his family (Toriel, Asriel, and Chara).

This is the result after Sacred Frisk revived them (Sorta). It was the best that Sacred Frisk could do at the time when their power was at its weakest.

Frisk promised Sans that they will come back, but they won't come back until 5 years later. By then, Frisk would have been 20 years old. This explains for their tall appearance. Frisk does end up in an relationship with Sans.

After Chara kills them they become like this. Frisk is only like this while they are dead. If they were to be revived, Frisk would not be in this form and would be in their normal Negatale form. They can only be seen by Chara (when in his Heartbroken form), Sacred Frisk, and Sin.

After running away from their home, the have stopped where there was a stone well (Which almost looked like the well from The Ring). Frisk realized that something was off and thinks that they shouldn't be too close to the well. Sin tells Frisk that it isn't so bad.

Frisk was frightened and asked "Who's there." Sin tells Frisk to not be afraid. Frisk was more frightened that Sin knows their name, even though they haven't even met each other (At least until now). Sin introduces themselves. Frisk was terrifies of Sin's appearance, but Sin tells them that they will not harm them. Sin tells them that they only appeared before Frisk because they (Frisk) are needed for their (Sin's) "assistance". Frisk doesn't know what Sin meant by Sin's assistance.

(More will be added; It is unclear if they are either possessed by Sin or they decided to agree on their bidding to kill all monster-kind.)

Frisk is light blue-skinned, dark blue-haired human with a blue/white bandage on their cheek. They wear a black sweater with two horizontal blue stripes (one going across the chest, and an big one that reaches the bottom of their sweater. They wear white shoes with black pants that are blue on the lower half on each leg.

Frisk is shown to be barefoot and have blue leggings. They wear a white dress that has long sleeves that cover their hands with a horizontal blue stripe boing across the chest. Their dress covers their neck. The ends of the dress are blue (The rim of the neck, sleeves, and the bottom of the robe).

Undead Form
Frisk looks like their Pacifist form. However they are taller than before (due to now being 20 years old at the time) and have stitches going across their arms and their clothes are slightly bloody (due to the blood dripping from their mouth) and some across the chest (Presumably due to the way they died). Their bangs cover their eyes.

Frisk looks like their Pacifist form, but they have the face that looks almost like Sin's. Their SOUL is shown on their chest, witch is grey with red veins.

Frisk's personality is quite similar to Undertale Frisk's.

Their Personality is still similar to their Pacifist Counterpart.

Frisk basically like their normal counterpart, but they are a Zombie. To calm their cravings, instead of eating brains like many zombies do, Frisk drinks some sort of salt and iron mixture.

Frisk is sadistic and homicidal. It is unclear if either Sin was possessing them was the reason for acting like this.

They possibly have the same abilities as Undertale Frisk (Such as SAVE, ACT, FIGHT MERCY, ITEM, ETC.)

In Genocide however, they are shown to carry an cleaver with a rigid blade.

Negatale toriel has offered Frisk a blueberry/blackberry pie after they have trespassed onto the castle. However, Toriel has added poison with the pie before serving it she would poison the pie and watches Frisk suffer with a warm smile.

Asriel was angry at Frisk for making him spill coffee, ruining his expensive suit.

Sans likes Frisk for their kindness.

Chara hates Frisk because of Sans liking them more thank Chara. He (Chara) was the one responsible for Frisk's death. 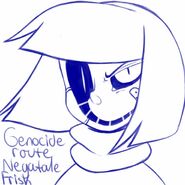 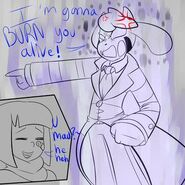 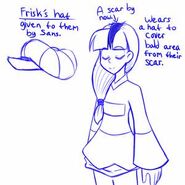 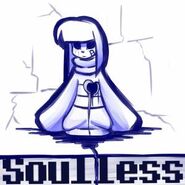