735q4e87 Wiki
Register
Don't have an account?
Sign In
Advertisement
in: Articles that need to be improved, Pages without a standard infobox, Characters,
and 5 more

Pink hair with stars and a yellow star hair clip

"We are family novae, no matter who you are, I’m just asking. But, why did you do this? Is it because you got to abandon my mom and dad? *sigh* I guess the multiverse will get destroyed because of you."
– Galaxy after being defeated in the Multiverse Destroyed route

Galaxy is one of the main characters of clock!tale.

When Galaxy was little, she would always look out and look at the stars all night. 20 years later, Galaxy finds a portal. Being the naive person she was, she went into the portal, and saw a friendly skeleton named Clock Sans.

But, she can’t go back home. Galaxy choose to stay in the multiverse because she wanna to help. Clock Sans tilt his head a little and said “are you sure, Galaxy? You will never see your family again.“ Galaxy understands the choose she made. Clock Sans started training Galaxy how to defend herself so she can defend herself from any unknown entity.

She doesn't have very good eyesight all the time. She wears ink jacket (given by Clock!Sans) blue Jeans and wears red-violet boots. She has purple hair and wears white t-shirt and some blue jeans.

She is a very kind person at times. She wants to help anybody in the multiverse who are in trouble. 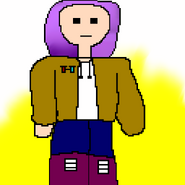