The Undertale multiverse, with splitting and branching AUs extending as far as one could possibly imagine, eventually comes to a stop. It wasn’t something that came out of nowhere for some denizens--after all, the "original" Sans spoke of reports that the timelines eventually stopped completely after a certain point.

But that wasn’t necessarily a cut-off point. Things didn’t cease to exist afterwards...but, rather, they merged. In a single instant, the multiverse reached critical mass and collapsed in on itself, forming the reality that we call HELP_tale: A place where all incarnations of all of our Undertale characters attempt to exist in the same place in spacetime. It doesn’t go well.

More specifically, all of these “alt-characters” merge into entities we call ITs: Absolutely atrocious beings that put Undertale’s own amalgamates to shame, and rather than being the result of Determination gone wrong, they’re reality’s attempt to parse hundreds of souls inhabiting the same body. For every “major” character in Undertale, there exists one of these ITs: Sans, Papyrus, Undyne, Napstablook, Alphys, Mettaton, Toriel, Asgore, Frisk, Chara, Asriel/Flowey, the six fallen humans, and even Gaster.

The nature of this merge causes some of these ITs to behave in different ways that reflect the most consistent traits amongst a character in each AU. The ITs of Toriel and Asgore will end up fusing due to their inseparable nature in the fandom, the IT of Frisk ends up becoming HELP_tale’s playable character, and the IT of the six fallen humans ends up forming what is called the Locket, an item of pure determination. More information on the specific traits of each IT will follow later.

Depending on how different or similar alternate interpretations of a character are across AUs, their ITs end up becoming less or more cohesive to compensate. Gaster’s IT exists at the farthest extreme of having wildly different interpretations due to having very little in the way of canonical info in the first place, so the IT itself struggles to maintain any physical form at all and goes so far as to disrupt the mechanics of the battle itself. Meanwhile, Frisk’s IT still looks (almost) exactly like them due to most AUs keeping Frisk in the same sphere of “effectively mute player character”.

The protagonist, using the power of the Locket, is able to separate these ITs into their composite souls, placing all of the respective alt-characters back into the universe and slowly forming a burgeoning melting pot of AUs. For example, when the Sans IT is separated, AU Sanses will be placed all throughout HELP_tale’s underground. They will then be joined by groups of AU Papyruses (Papyri?) when the Papyrus IT is separated, and so on and so forth.

In essence, HELP_tale’s setting swings back and forth between focusing on the ITs and the strange nature of this timeline merge and then focusing on the AU characters themselves and the ensuing antics that emerge from these myriad characters sharing the same space. It is important to note that, although they still retain all other aspects of their presented forms, characters from AUs do not remember the actual setting from which they came, with the exception of reality benders like Error Sans. (Speaking of which, places that are shown to exist between or outside of universes, like CORE Frisk’s Omega Timeline and Error’s void will still function as normal in HELP_tale; only the actual AUs themselves are merged!)

Now, some AU characters count as multiple people at once, such as Comic Papyrus or Chisk. The composite parts of, say, the Chara-ness in Chisk would go to Chara’s IT, and the rest to Frisk. These characters can only appear when the respective ITs of all their composite characters are separated. For example, for Sixbones to appear in the HELP_tale universe, both the Sans IT and the Papyrus IT would need to be separated.

As of july 6, Israphelite has taken over the au, and has released one new chapter. 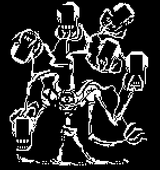 Trailer Made by Quantum Dranger