During the events of Pre-Underheaven's apocalypse, UHeaven!Sans ended up lasing a battle with Lucida which would prove fatal In his case. However, before his death he managed to sabatoge Lucida's Revive which backfired and trapped him in a state between death and life. A short while later Weaver was afforded a second chance at "existance" via Courier, however as he later discovered this deal only allowed him to "exist" and not to "live again". Additionally, in order to continue existing, Weaver found that he would have to consume magical energy or fragments of creation. After many years of this "existance" Weaver managed to reform himself Into his current state of being. Unfortunately, over this same amount of time his state of mind changed for the worse. Currently he conducts experiments and hosts "survival games" in order to test the "potential" each victim possesses. He also messes in the affairs of the multiveme from afar.

He likes to study people from afar and will act like a good guy to hide There true intentions but he isn’t exactly a bad guy all the time. He his a doctor and his facility is where he conducts his work on those unfortunate to come across him he uses medical equipment in his facility. What happens to these monsters is wildly unknown. He likes making “friends” by weaving dust particles together.

Nightweaver Sans is seen to wear a short cloak with hood up. The cloak is two different colors, grey and white. The hood is both colors, half and half. The lower part of the cloak is the grey half covering up the white part and clipped to be held there. The cloak has a teal edge and has strings that look like what you would find on a hoodie. On the right part of the cloak, there seems to be a teal clock sign. He is also wearing grey shorts that look like they have been torn at the edges. No shoes/slippers. One half of his body is grey, and the other half is white. He has heart-shaped holes in his hands and feet. The eye on the grey side is white, and the eye on the white side is black. Nightweaver is seen to have "dust eyes" behind him.

His goal is to kill the creator. He doesn't believe in the happy endings shown in stories so he has his own satirical happy ending for the world of the void and the sphere. and will destroy any creation of anyone who hates other creations and transfer that hatred to their creations 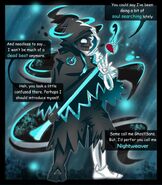