Papyrus is the son of the use to be famous W.D Gaster before he wasTemplate:Au Character Templateimprisoned for breaking into the State Capital Jail. He first appears in the Snowdin forest after the human exists the ruins. He serves as a protector/supporting character in the neutral run and True Pacifist. But like his other fell counterparts, he will try to make you kill him during the Pacifist run. In the genocide run, he serves as one of the final and strongest opponents throughout the entirety of the underground. He also has the role of the Royal Judge.

Papyrus appears as a tall, laid back skeleton with a knack for dark humor. He bears a resemblance to Swapfell Papyrus in terms of head structure. He enjoys visiting his father every so often and annoys him with his dark jokes. Papyrus enjoys drinking beer during his off days. He likes spending his time at Muffet's bar or home binge watching Anime.

Before future events, Papyrus had been using the door to the Ruins to practice his dark knock-knock jokes. However instead of just Asgore being behind the door, Mettaton was also there, and they became very good friends. Asgore asked both Mettaton & Papyrus to promise to protect any human who comes through the door, which Papyrus & Mettaton obliged to. They both state to the human later on, that if they didn't make that promise. "You would have died the second you exited the ruins."

If his father is killed, Papyrus will most likely disappear and stalk the human, before attempting to kill them in the Genocide fight. In the genocide run, checking Papyrus will lead to the discovery that he has above average stats.

He usually maintains good posture, so he isn't seen as a target for the gangs of the underground.

Papyrus can summon Gaster Blasters and bones just like his other counterparts.

Pacifist: Papyrus will block Alphys from attacking you once you reach Hotlands, at the Judgement hall Papyrus will try to make you kill him and take his soul (Like his other Fell Counterparts)

Genocide: let's just say that you're not gonna like what happens next.

A Friend, they first met at the ruins

He despises Toriel for what she did to her own children

Doesn't care enough to even look at him. This causes Bob to always mess with Papyrus so he will notice him. All it really does is make Papyrus care even less.

A good friend of his and Gaster

His father. He is being held prisoner in the True Lab for breaking into the State Capitals Jail

A friend of his, help keep an eye over the human.

Credit to the original Artist. 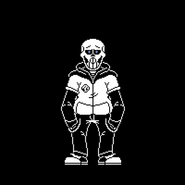 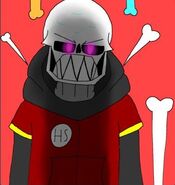 By slightly_no
Community content is available under CC-BY-SA unless otherwise noted.
Advertisement