(ONLY with a physical form)

In a state of physical limbo/Alive

Left: Yellow with a black biohazard symbol inside it

Right: Rings of alternating Yellow-Green and Yellow starting with yellow

Varies depending on strength

Varies depending on current level of magic

same as Sans
Pestilence!Sans is a parasite-like being that feeds off the magic of other beings. He is an out-code Sans.

His creator is Hoshi-Tsubasa on Tumblr.

Pestilence!Sans is a skeleton that has been blackened by disease. He has a cloud of pestilence hovering around him at all times. His legs and fingers fade into neon green. His left eye has a bio hazard symbol in it while the right is alternating yellow and neon green in a bullseye pattern. His teeth are also neon green.

He wears a back hooded jacked ripped at the ends with a thick yellow stripe across the chest and pea-green sleeves/hood. He also wears a mustard yellow turtle-neck and black shorts with similar pea-green stripes down the sides. He has bright yellow socks and pea-green slippers with black cartoon skulls on them. Around his neck he wears "WARNING!/BIOHAZARD!" tape like a scarf.

In his 2020 redesign, the gradient fade on his fingers and legs are now a somewhat dull yellow-green. His left eye, which was previously neon green, is now yellow. His hoodie is now a dark forest green. The pockets of hoodie are now the same color as his sleeves/hood, which is still pea-green. Also, his shirt is now more of a muted yellow-green. His pants changed from shorts to pants the same color as his hoodie's sleeves and now sport black/yellow stripes down the leg. He no longer wears slippers, now wearing dark green sneaker-type shoes with yellow toes and a bright yellow-green bio hazard symbol on the outward facing sides.

He originally looked like Classic!Sans, except with green rather than blue.

Pestilence!Sans has the typical laziness of Classic!Sans, but tends to make jokes at the expense of others. He is generally disliked because he comes off as rude or apathetic. His actions are usually motivated by selfish reasons or whatever will help him survive.

However, there have been occasions where he has wavered in his indifference and shown to display some extent of care towards others.[1]

Pestilence!Sans was originally from an alternate timeline. However, this timeline ended up becoming riddled with infection and disease. Everyone died, even Pestilence!Sans and the Frisk of that timeline. However, he was determined to live. In the rift between life and death, he used the remainder of his magic to create an immunity to the diseases that destroyed his timeline and return to life.

By doing this, he condemned himself to a life where he was forced to live off another being's magic or return to death. Close to starvation, he used the remainder of his timeline's magic and tore free from his crumbling AU, entering into the void between worlds. With so little magic left in him, his form was reduced to something like dust. He wandered about the void, fearful he would die off if he was unable to find magic.

By luck, he was able to find an AU (BrimstoneTale). He entered it, attached himself to the Sans of that universe and slowly drained it of its magic. At first, everyone in that AU was blissfully unaware of what was happening. It was too late when Inferno!Sans realized just how much danger he and his universe was in. Pestilence!Sans used Inferno!Sans to corrupt and siphon the rest of the magic in BrimstoneTale. Soon, the AU crumbled just like Pestilence!Sans' own AU. With no more magic to consume, he left the AU to die in search of another host.

When Pestilence!Sans has enough magic and a physical form, he is able to use the abilities and magic that all Sans can use, including Gaster Blasters, KARMA, and Gravity Manipulation. This includes shortcuts.

Pestilence!Sans' current host from UnderZoo. At first, the two had a rather uncomfortable relationship, Zoo!Sans not trusting Pestilence!Sans. As time goes one, however, the two begin to rely on and trust one another, becoming something similar to friends.

Ink does not see kindly of someone who destroys AUs. He has hunted Pestilence!Sans down, but has not been able to fully defeat him yet. 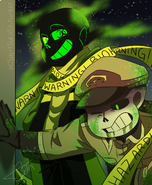 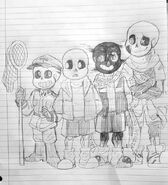 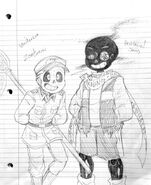 Original concepts for Pesti and Zoo