735q4e87 Wiki
Register
Don't have an account?
Sign In
Advertisement
in: Pages without a standard infobox, Neutral, Pseudo-Human,
and 9 more

It all starts with the fact that our hero appears on the flowers, as the children did. Like everyone else, the Player meets Flowey, who, as always, wanted to appear to the stranger as a “friend”, so that he would later nastily stab him in the back. But our hacker is not easy. Having completed all the endings, they already knew perfectly well that, in fact, this flower is evil itself. Grabbing the stem of Flowey, he remembered everything that happened in all time lines. Having remembered everything, Flowey wanted to insult the Player, but the Player frightened him, saying: “Don’t dare to talk to me like that, otherwise I will tear out and recount all your petals.”

Then they walked along the Ruins, after which they said goodbye to Toriel and left the Ruins. And so it all went to a snowy location. The Player meets a joyful skeleton, who held out his hand. Sensing the level of the player, Sans made an attack, but unfortunately the skeleton did not hit. Then the player and the skeleton appear in the courtroom, where the person explains that he, how he not knows everything and where he got such Level (known as L.O.V.E. or Level Of Violence.

But evil does not sleep. Another Player started a Genocide run, simultaneously managing Frisk as a puppet. The Player stops for a while, after which he is thrown out of the world. Unfortunately, Chara took control of Frisk, telling the brothers that this world would soon be erased. So everything went until the royal guard gathered in the courtroom. Sans, Mettaton and Undyne. They tried to stop Frisk, but nothing came of it. Further, the Frisk, which was controlled by the player, makes a blow to Sans, thereby disabling the skeleton. It would seem that already death takes the skeleton, but the Player returns again, calling for green friendliness pellets, which quickly flew to Sans and healed him. Further, Frisk makes a blow to Asgore, killing him and ending the genocide (Flowey is killed in the Ruins). Then Chara appears in front of the player, which the Player abruptly replaced. Next is the exchange of discharges. Having exchanged his reset with the Player reset, the Hacker makes a blow that kills Frisk, as at the end of the Genocide. The button was a reset that led to the alternative HorrorTale universe where the sinner will spend terrible times. Reset Frisk himself makes a choice. Having reached the end, Frisk passed the pacifist completely. The Player replicated a monster soul for Asriel and a human soul for Chara so that they could both live. Then the player makes a reset, after which he enters the room where Gaster was, and puts him the final ultimatum.

The player is dressed in a black suit, vaguely reminiscent of a dress. This “dress” covers the Player’s knees. On this very suit, like Frisk or Enchantment, there are red stripes. From under the suit, you can see black pants and dark brown shoes. The Player's hair is red. Their white eyes are black and their iris is red. Unlike the above listed Frisk and Charа, the Player has gray skin. Since this character has the ability to manipulate the game, they can change their appearance, but this was not shown in the comic. Also under the eyes has red ovals, which are possibly cheeks.

They are programmer\hacker with an empty heart; Not a single ending of the game suited them, in the eternal search for a better ending for themselves; Uses their soul to jump through space; Uses program code to communicate with them; The master of a tremendous power of decisiveness, which they cannot always control. Always wants to seem strong in front of others, but in the end remains a monster in the eyes of others; Poorly versed in color gamut adjustment; Always does only what they sees fit. Not on the side of evil nor good. The main goal for them is to find advantages for themself.

Character Universe is UnderTale. Do not think that UnderPlayer is an Alternative Universe where only the Player exists. According to the canon, a player appears in the UnderTale world, trying to become an absolute friend to everyone.

Abilities (~Canon~) All sources of info comes from here. 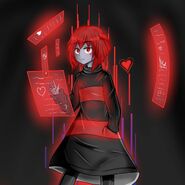 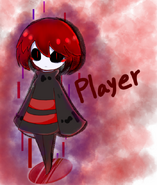 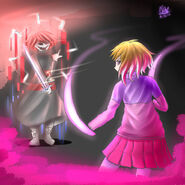