AT Papyrus (Brother), AT Gaster (Father)

Jeweler (in his world)

Anyone calling him Short

Abyss Sans is from the AU Abysstale made by Meta-kaz on deviantart. In the story Abysstale, the AU was completely destroyed.

When he got an emergency call from Undyne (an attack in a city), he got into a very powerful state. He woke up in MTT vacation house. His brother Papyrus was badly damaged in battle, and was in healing. Abyss!Mettaton, Abyss!Alphys and Abyss Sans were the only one still alive. ( Papyrus seems like he's in a coma, and that does not exactly count as alive) For safety, Alphys made a teleporter that can teleport the house to somewhere else. But an error occurred in the middle of the transfer and teleport them to another AU. Afterwards, Mecha came. He was freaking out when he saw Abyss!Mettaton and Abyss!Alphys, he was in a unstable mode and Abyss!Sans hugged him to comfort him.

Abyss is also shown to be thoughtful, as he would put others ahead than his own well-being.

He is hardworking, but people call him weak.

Abyss Sans wears a cobalt blue long sleeved jacket, black shirt (when jacket is off), black shorts with powder blue stripes on the sides and black socks with white slipper shoes. He also has white fluffs on the jacket and scarves (turns turquoise and DNA like structures on it when used for flight and battles).

Abyss Sans’ eyes have three phases. the first is his normal eye appearance. the second is slightly thick with white pupils. It was shown when he’s in a critical situation in battle. In addition to that second eye phase, he had access to his gaster blasters. The last phase had much thicker eyes with the same pupils as the second but with a white ‘ring’ outside the pupil. it was shown briefly in the comic when he’s serious. There are dna strands on the upper and lower sides of his eye sockets. The purpose of this is currently unknown.

CELL CORE(Cellular Evolutionary Level): Abyss Sans doesn't exactly have a soul. Instead, he has something called a "Cell Core". They look like a turquoise ball with DNA inside, and some weird worms (I believe) moving. They are made out of living organisms, or CELLs, the true definition of evolution. They were created by the last royal scientist. They can create their own energy that can surpass magic. CELLs cannot survive without a host...for now, but they don't take the life force of the host, instead they give the host energy to survive. They make the host a bit more stronger than regular monsters. This way, the host can avoid the worse case of death, "Fallen down". Abyss Sans' Cell core has evolved into the next stage, his magic surpass regular monster magic. His magic surpass regular monster magic. He can summon wings, shield, chain, and some energy from his CELL.

Bone Manipulation: He can use bone and cell bone attacks which are made of cell that can inflict energy and electric bursts to an opponent. If someone holds it, they may be inflicted with paralysis or burned to death.

AU Teleportation: Abyss can teleport to any AUs.

Incredible Regeneration: Abyss is able to regenerate his wounds. For instance, a small injury can be healed in 1 second and mild or medium injuries can be healed in 2 seconds. If he had severe injuries (such as destroyed limbs or other major fractures), it can take 3 seconds.

Energy Detecting: Abyss can detect every energy of living beings, including robots with souls (e.g. Mecha).

Immunity to all viruses, illnesses, venom and toxic: That is why he is rarely sick.

Immunity to code modifications and hacking: Since he does not have a code.

Abyss' only weakness is hospitals and labs. Despite this, he can temporarily overcome it if he has his friends or his brother, papyrus by his side. 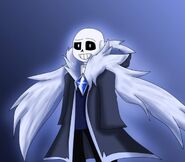 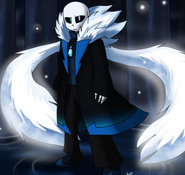