735q4e87 Wiki
Register
Don't have an account?
Sign In
Advertisement
in: Pages with broken file links, Chess, Sans,
and 5 more

He is associated with a Pawn in chess. He is lazy and punny, and is the weakest piece in the game, but could potentially be awesome. He deeply loves his brother and frisk, and hates making promises. It can be said he is good at chess. It is said that he is gay for classic.

He has a light-grey button up shirt under a blue leather vest which he wears under a dark blue coat with light-blue embroidering. His pants are usually dark-blue with light-blue embroidering and a purple badge on a stripe on his pants. The pants vary from blue to brown through different drawings, but the purple badge is constant. His boots are the same.

He has no hair and instead of the usual left blue eye his eye is the right one. And he has some kind of eyebrows. 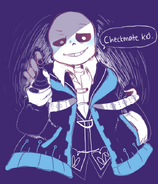 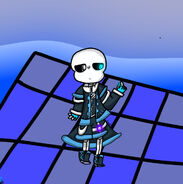 Get Ready Kiddo
Community content is available under CC-BY-SA unless otherwise noted.
Advertisement