"You think you have a chance of preventing corruption to your code? It may not seem like it but it's already taking place.."
– Corruption

Anyone who interferes with his work.

Sans, or well known as Corruption, is a major character part of a fan-made Undertale AU, Corruptiontale, made by Flygeil.

His goal is to locate Corruption!Chara and get rid of them before they become a threat to the Multiverse and a larger threat than him. His method of getting rid of Corruption!Chara is by corrupting any AUs he encounters, as he believes there is a chance that Chara may be hiding within one of them. Despite it being a highly inefficient process, he continues to persevere this goal.

He has lost his world from a selfish human. Corruption!Sans has been removed from it which helped prevent him from inevitable corruption.

He has an identical appearance to Sans. But, his clothing is darker and with his eye sockets melted.

Corruption is a mad skeleton, shown to be careless to the AUs he's massacred. This carelessness stems from his belief that all AUs are simply rewrites of each other, so one AU getting corrupted wasn't going to affect the Multiverse in a negative way. However he reapplies this belief after corrupting more than just one AU, possibly a couple hundred due to his other belief that all corrupted AUs would've been brought back in the natural process of "rewriting" and because of this, it makes him believe that the removal of a couple hundred or thousand AUs was simply a natural process in the Multiverse.

He doesn't directly approach an entity within an AU, but rather take them down along with the AU by corrupting the AU from the inside. This strategy is to simply affect the weak points within the AU. Over time, the entire AU will collapse, making it inhabitable for any entity including Corruption!Chara, but excluding Corruption!Sans.

However if he is caught by an entity such as a character from an AU or an out-code, he would be very cautious in their encounter. In most scenarios, he is unaware of the capabilities of his enemies. He doesn't choose to do bold actions but instead tries to flee. If he is caught by his enemy after fleeing, he will try his best to learn the capabilities of them before deciding to strike them.

He can be brought to overwhelming sadness if the events in his past are brought up, but this will only cause him to go in a blind rage towards the enemy, and makes him less cautious of the situation. Eventually, he'll calm down and realize what has happened then flee the area.

Without being within the NULL Dimension, he loses a significant amount of his strength and power, making it easier for opponents to kill him.

This power can counter any effects of his Corruption Touch and Effect. This doesn't affect him but does prevent any code he tries to corrupt from being corrupted.

This Bone Magic is much powerful than the average. These bones can be summoned with customizable properties with the help of the Modded Menu. The customization is based off what type of code Corruption injects within them.

An example of bone magic customization is a "Blue Magic Bone". This modded bone has been injected with the base code of Blue Magic which applies Blue Magic manipulation upon touch. This can be useful for preserving magic without overwhelming Corruption as it would require more magic to directly use his Magic Eye for Blue Magic, rather than to insert the code of Blue Magic in a less consuming Bone Attack.

This Gaster Blaster Magic is much powerful than the average. These blasters can be summoned with customizable properties with the help of the Modded Menu. The customization is based off what type of code Corruption injects within them.

He can control a soul and manipulate it in any way. He commonly uses telekinesis to force his opponents into his attacks, forcing them to get corrupted and lose their code.

This Blue Magic is much more flexible than the average. Corruption is able to modify the force being applied, as well as the direction or destination the SOUL is being pushed to. If he applies absolutely no force, he can keep a SOUL floating in mid-air.

Any physical contact on him can cause corruption. It can affect anything connected to a soul. Initially, if the object isn't connected to a soul, it will not be corrupted unless Corruption desires it. This took place during his encounter with Error!Sans. Corruption was able to spread the corruption with Error's strings, eventually reaching Error. In a desperate attempt to neutralize Corruption, Error tried to string Corruption. However this failed as Corruption has harvested the strings' code and made it ineffective to him and Error. Error!Sans had been to vulnerable to the Corruption Touch so he had fled.

When the Corruption Touch is in effect, any matter caught by the corruption will turn gray. Any power connected to the object with soul power will be corrupted and cannot be restored. Any power that is linked with the soul will be absorbed and increase Corruption's overall strength with the help of his Modded Menu.

He is able to teleport from place to place. He can teleport or exit out of the NULL Dimension and travel through any void available. From an AU's void, he can exit it and wreak havoc across the AU.

A modified menu created by portions of the Menu Screen. After knowing how to manipulate code, Sans was able to allow this custom menu of his to reveal and store code. This gives him a lot of information about the enemies or anomalies that he encounters. He can find information such as Name, Universe Origin, Powers and Abilities, Strengths, Weaknesses, and much more. Sans has linked a portion of Papyrus' code within the Modded Menu, giving him the ability to talk with Papyrus.

If an anomaly is corrupted by Corruption!Sans with the use of Corruption Touch and Effect, their obtained code can be used to recreate an obedient Corruption clone of the anomaly. This allows him to have an army of Corrupted anomalies. However Corruption!Sans doesn't use this often as he very much enjoys the terror he brings upon the AUs himself.

His brother. At the time of which the Corruption initially started, Papyrus' code wasn't active or being used. Due to this, the code was much more vulnerable to corruption since it was inactive. With the help of Corruption!Sans' Modded Menu, Papyrus is able to communicate with Sans. Corruption!Sans chats with Papyrus a lot within and outside of the NULL Dimension. 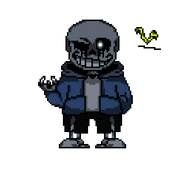 Unofficial sprite of Corruption!Sans (Made by Vin#6037)

Unofficial sprite of Corruption!Sans (Made by unknown)

Digital art of Corruption!Sans (Made by Blazing Draws)

Drawing of Corruptdrip (Made by Synical#7583)
Community content is available under CC-BY-SA unless otherwise noted.
Advertisement