Searching for his brother

Any Speedcore remix of Megalovania

Crazedtale, Sand Underman but he has a gun

Searching for his missing brother

His mistakes, the invader, his murder acts

White eye sockets, has a red dot on his right eye (when calmed)

Has a black bad time eye (when angered)

0 (usually he doesnt have any gold in them)

Check, Check, Talk
Crazed Sans is the main protagonist from CrazedTale. He takes a similar role as UnderTale Sans but because of what happened there, his role changes significally. For more info you can check his trello.

Crazed Sans is similar to UnderTale Sans but he has significant changes. His eye sockets are white, in the right one he has a red dot (his eye) and can become dark if he's angered and the left eye has a scar on its top. His jaw and the sides of the head has black lines, representing his HATE collected from absorbing human souls and killing both humans and monsters.

He wears a dark grey hoodie with a white t-shirt. The t-shirt also has black lines from the HATE and also on his left part of the chest there is a determination soul, surrounded by the black lines, this soul is from CrazedTale Frisk. He tries to hide it with his jacket but sometimes he forgets and leaves it open. He wears black shorts with a dark red plus symbol and black dots on them. Crazed Sans uses white shoes with black lines and dark red color on his toe cap.

Before the last human fell in the underground, Sans lived in the underground with the monsters and his brother Papyrus. While Papyrus was practicing to become the leader of the royal guard, Crazed discovered something interesting when he was wandering around and it was a weapon. This weapon was the Bravery's mace who belonged to a teenager human who fell in the underground and was defeated by Undyne (who was the leader of the royal guard at that time). Sans got interested in that weapon and learned how to use it and how to make it more efficient if he needed to protect his brother from something dangerous, also occasionally in his free time he learned science with the royal scientist. Papyrus defeated Undyne in a battle and the king let him to become the new leader and everyone was proud of him, even Undyne. Next to that event, the last human fell in the underground for unknown purposes and began the adventure of CrazedTale.

The human took the pacifist route and befriended every monster they encounter, in the end meeting Sans with a hope of leaving the underground, which succeeded but Crazed still having doubts about the human knowing that he had the determination soul which he studied with the royal scientist. After the pacifist route, sans couldn't sleep knowing about the power of the human "what if they reset and begin genocide?". Some days later he saw an entity fighting his brother but before he could react, they both were gone, Sans searched everywhere in vain. After that he went to talk to the human (thinking that it was him who made Papyrus disappear) and sans couldn't believe them (since this Sans cant cheek your game data), he fought frisk and absorbed his soul before he could repeat the battle or reset, he found out he has 0 LOVE and EXP. Next he went crazy knowing he broke his promise he made with Toriel and if the world knew he killed a human, another war would begin so he went rampage and killed everyone in his world. He only saved Frisk's soul on his chest because he absorbed it and he thinks he made a mistake he have to live with forever. Since his AU is now empty, he wanders the multiverse, trying to find his brother and sometimes killing monsters once they discovered what he did in his Alternate Universe.

Like normal Sans, he can teleport, use telekinesis and summon bones and gaster blasters but he doesn't have karma retribution because of what happened.

His special abilities are mace related, he can make maces bigger/smaller, change the appearance to anything related to maces even a chain mace, making it float to damage the enemy and multiplying them

Also with the determination soul he absorbed and the rest of the human souls which strengthen it, he can also use determination beams which can kill almost any monster instantly which isn't corrupted or doesn't have higher level than 2.000, if they have a superior LOVE they still receive damage. This attack is only used when he is angered 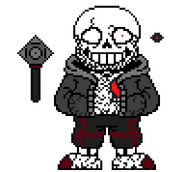 Crazed sans with his mace and bad time eye 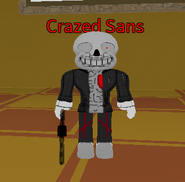 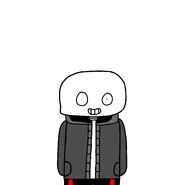 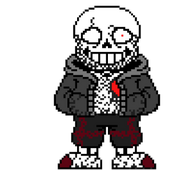