This article is an old canon of Error!Sans. You may be looking for Hobo!Error of Lucidia.

error sans.
Song That Might Play When You Fight Error!Sans
ErrorVania/ERRORLOVANIA
I've Got No Strings
-ERROR

A Deathly Blue and Yellow

Error!Sans is an AU destroyer created by Tumblr user Lover of Piggies(also known as Crayon Queen or CQ for short) on Tumblr. In this AU, he is bent on destroying all AUs and things he considers 'glitches' or 'mistakes' in the multiverse.

He uses blue strings to tie up and shatter souls. If the strings go inside a victim, he will be able to transfer his soul into the victim, controlling them to do whatever he likes, leaving the victim helpless. He can jump from one universe to another, as well as having several other glitch powers/quirks.

This AU connects to many other AUs, so it's best to get to know some other AUs before you jump into this one.

Geno did it. He was finally free from the Save-Screen, and he finally had gotten the ending he deserved. Yet during his time in the surface, he had began to play around with his DETERMINATION, despite Sans telling him to stop doing so. Finally, Geno had accidentally sent himself to an empty and endless place where time was non-existent. He quickly began to grow insane, the emptiness and the loneliness eating up at his sanity and his anger towards everything (and everyone he had helped) shaped him into who he is now, his memory was erased during the process as well.

Now, he considers his life's mission to destroy anomalies, "Glitches" and AUs, seeing them as "mistakes".

Ironically, he does not view himself as an "anomaly". He likes to seek and destroy AU's left and right, except for the ones he likes such as OuterTale and UnderNovela. How he does it is that he first keeps Frisk and Flowey under guard, so they are unable to reset (he imprisons them). Then, he proceeds to go on a killing spree.

Error was a glitched skeleton that was created in the Anti-Void. He is the result of an alternate Genocide Sans playing with his DETERMINATION and sending himself to the Anti-Void, where he turned into Error.﻿

Error is somewhat demented and psychotic. He is determined to find all anomalies and "glitches" within various timelines and destroy them. His character is the one of confusion and somewhat hypocritical behavior since he himself is an anomaly, but sees himself as the cleanser of timelines instead. He has been stated to be a complete mystery due to his erratic and unpredictable behaviors he has. He keeps "puppets" of his other alternate versions of selves that he talks to calling the standard Sans, called "Sans Classic" and naming the others by numbers. Despite admitting he is an anomaly/glitch, he says he is different and that he is the only one doing something about it. He wants to hunt down CORE! Frisk and the Omega Timeline.

His real motives and behaviors are still a mystery.

Error is a Black skeleton who wears black slippers and wears a black coat with a blue hood. His legs are red and has red/yellow fingers. He wears Black sweatpants that has a vertical blue stripe on each leg. His teeth are a light yellowish color. The inside of his eyes are red as well as his nose. His right eye is a white pupil, while his left eye is blue with a thick yellow ring around it with a black pupil in the middle. there are blue markings on his face that assemble "tears". If Error blushes for any reason, like embarrassment, it is blue. (For Appearance for Lucida, See Error.)

In his AU, he is bent on destroying AUs which he considers 'glitches' or 'mistakes' in the multiverse. He is all black with a black hoodie, black pants with one blue stripe on each side, a red shirt, blue tear streaks down both his eye sockets, yellow teeth, black hands with red fingers and yellow tips. (he is sometimes portrayed to wear round red eyeglasses)

Error Blaster: He uses a type of Gaster Blaster called an Error Blaster, which are simply Gaster Blasters that are black in color and have blue tear-marks falling from their red eye sockets. Error's Gaster blaster is bigger, faster, and stronger than Classic Sans'.

Blue Strings: He uses blue strings to tie up and shatter SOULS, if his strings go inside a victim, he can transfer his soul into the victim's body, making his body vanish and the victim's soul to vanish turning the victim into him. This makes him able to control the victim, while the victim is helpless. This is Error's "main weapon" because Error feels more comfortable with the strings, as Error doesn't have very good eyesight.

AU Jump: He can also jump into one universe to another along with other glitchy powers and quirks.

Physical Contact: Error has haphephobia (the fear of being touched) and is therefore very hesitant to get physically close to anyone.

His love for chocolate: He also likes chocolate [like Chara], which can be a down side. (If you think about it)

Glitching (Error.Exe has crashed): At random intervals, he can glitch up, filling his eye sockets with errors, giving him a major disadvantage if he's in battle. If Error had no strings, he would be a very easy problem to fix.

Near-sighted: Error also cannot see things far away clearly, as he uses round, red glasses a few times in the comic to show this. The glasses are kept in the pockets of his hoodie. He also knows how to knit, sort of.

Water: He is also supposedly weak to water, but this isn't canon.

Afraid of Fresh: He is always freaked out by Fresh. He can sometimes get distracted by "it".

His love for cute things: As shown in Underfail, he has love for cuteness, like Undercute. He wants to cuddle soft and fluffy creatures, despite his haphephobia. He refuses to destroy and erase cute things that shouldn't deserve it.

Menger sponge: If two Error Sanses get too close to each other, they both merge each other, crumble, splitting into Menger sponges before obliteration, and causing an explosive reaction that may harm those close by.

(Keep in mind that not all of this information is considered canon.)

Classic Sans is just as bad as everyone else. However, Classic sans and Error CAN get along sometimes. Along with how Classic Sans one time did watch Undernovela from behind Error, and Error couldn't have cared less. It's pretty odd, but it's chill. However, they sometimes do fight.

They get along, somehow. It's unclear why Error gets along with Swap! Sans so well, but it's probably because he's the first "friend" Error has had in a long time. He sometimes gives him chocolate. After Error returned to the Anti!Void, he found out that Swap had turned into an Error.

Fresh!Sans (one of Error's fears)

Error! SansError is disgusted and scared by Fresh Sans. When they first met, Error blasted Fresh. Error is even more horrified by Fresh because Fresh often gets too close to him due to having Haphephobia (not yet even considering the fact that Fresh is a universe-wide-infecting parasite). Fresh is a very hard opponent because his soul lays in his left eye socket. He looks like a normal kid that wears lots of colors and the one who seems all happy but really Fresh can't actually feel happy, sad, angry, jealous, fear, etc...

Error Sans doesn't remember anything about his past life as Geno.

Fatal_Error was created when error sans tried to kill Geno Sans. Error didn't believe Geno that he couldn't be killed in the SAVE screen but no this was not the case. Fatal!Error was extremely powerful. He can defeat any sans. He goes around looking for his lost papyrus because he will do anything to get back his papyrus. He was confirmed to be canonical to loverofpiggies' original ask Error Sans series right here. https://loverofpiggies.tumblr.com/tagged/now-canon-i-decree. Error sans would easily be defeated and only but only Ink!Sans or X Gaster (maybe).

Ink and Error are portrayed by the fandom to be enemies as Ink Sans is the protector of the AU's while Error is the destroyer of the AU's. However, some people consider them to be friends, arch-enemies or even lovers. (some people "ship" them.) They are sometimes even portrayed as brothers.

In some AUs, Ink and Error actually came to an agreement; as long as Error won't destroy any AUs, Ink won‘t help the creators create any AUs. In the video UnderVerse 2.0, Error tried to stop Ink's blank side (which was kind of evil), but Error couldn't stop him.

PaperJam is considered Error and Ink's accidental child. Once PaperJam first formed from the remains of Error's scattered strings and Ink's leftover piles of ink that were scattered about the multiverse, which took a process of about three years, PaperJam started to walk around to see where they ended up at. Eventually, he found the two at the end of a battle- where Ink’s body was scattered all over the place and Error was about to do one more strike… PaperJam screamed.

What else was he supposed to do? Error noticed him and felt an odd connection (which Ink did as well) and he really didn't like how that felt within him. Error panicked and shouted at PaperJam, calling him a "mistake" and "an abomination that shouldn't have existed" before disappearing. PaperJam was very hurt. When Ink was healed, he took care of PJ.

Before C.Q. revealed Error's origins, people assumed he had come from a broken timeline. They assumed that after the first timeline was destroyed, Frisk had turned into Error!Frisk and had become Error's student. Error!Sans is unaware that the human is "Frisk".

Error believes he is the only Error in the multiverse, but there is his brother who also turned out to be one that he does NOT know of. He refuses to discuss Papyrus. At all. However, it may say that he was hidden among the ‘in-between files’ of the multiverses.

Rumor has it that Error!Sans may NOT be alone, as there are many Error characters that live inside the Anti-Void, such as Error!Undyne.

With Undercute is being destroyed by Pandora along with others, Error is now seeking vengeance for his favorite AU's destruction.

Happytale (An AU he mostly destroyed)

Error mostly created a dark version of Undertale from the reset files called Happytale, which isn't really happy at all. Error destroyed most of Happytale until Core!Frisk used a file traveler to travel the files only able to be used once, and he completely forgot about Happytale until he remembered from another game reset. Now, Happytale is an unknown universe no one has heard of.

404 sees Error as an apprentice and maybe a worthy successor to himself. 404 and Error's relationship can vary from student and teacher to child and guardian and even to cruel and distrusting. The 2 have had almost spent enou

gh time with each-other to fill a tub. 404s expectations for Error are unimaginably High, going as far as giving him Impossible task so that one day Error can finally live and complete his goal of getting rid of Ink. These unimaginably high bars 404 sets for Error often lead to lots of arguing and fighting amoungst the two. They have nearly left each other on multiple occasions and only have ever come back together due to the fact they both have equal and goals and on the grounds of them in some sick way needing each other. 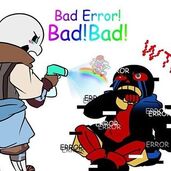 error discussing a truce while fresh shows off his cameos