735q4e87 Wiki
Register
Don't have an account?
Sign In
Advertisement
in: Sans, The Judge Role, Glitch,
and 5 more

Greyscale!Sans is Sans, but he has been corrupted by the Greyscale Virus. Template:Infobox Character

Greyscale!Sans was originally just normal Sans, but one day, unaware of his surroundings, ended up with the virus. The two skele-bros passed it off as something normal, but over time things grew worse. By the fifth day, things started to change, and not in a good way. Sans had developed terrible symptoms and fell into a coma. Papyrus, in a desperate attempt to save him, dialed Alphys' number, and he was rushed to the True Lab. Things looked good as days passed by, but on the fourteenth day everything changed. His soul had begun to break once Alphys had accidentally mixed his soul with hatred and a slight amount of Determination. In a desperate attempt to save him, Alphys had no choice: to let the virus take over his soul completely and hope for the best. On the twentieth day, Sans finally woke up. However, he was not the same. The virus had turned him completely black and white, and it had corrupted his mind, because a crack was in his head. He would never be the same.

Greyscale!Sans' appearance is similar to UT Sans, however, part of his skull is cracked due to severe damage in the lab. His clothing is all in grey, and his eyes are spilling out due to the Determination left over. He has small rips in his shirt and hoodie. His glowing eye is now permanently dark grey.

Greyscale!Sans is mentally unstable. The crack in his head has ruined his memory and he now mostly has visions of negative things. However, he still does have some sanity left. There is a small part in his brain that still has the good old memories. He still loves his brother, as always, and cracks terrible puns and likes ketchup as always. However, this part rarely shows. He hides his emotions and is an introvert. He only tells what's going on inside his head to Papyrus, and not even he can understand what he's going through.

- He can use Gaster Blasters

- He can shoot bones

- He can change soul color to blue

- Can easily defeat others

- There is a minor chance that when fought, he will randomly freeze, making him vulnerable to attacks

- He doesn't have good memory 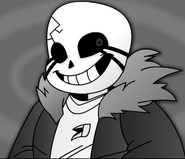