735q4e87 Wiki
Register
Don't have an account?
Sign In
Advertisement
in: Pages without a standard infobox, Error, Dreamtale,
and 11 more

Ink!Sans (Not known if Ink is his cousin or not)

Possibly has the same weapons as Error Sans and Nightmare Sans

Possibly has the same abilities as Error Sans and Nightmare Sans

Lord of the Black Hole and Protector of multiverse balance

Anything that can disturb the multiverse balance

When Nightmare's slime witnessed the aggregation of Error strings, it favored them, intending to use them as a weapon to bring chaos into the multiverse Night error was created. However, Night error's plan became discovered by Ink, whom to avoid disarray, broke his soul, and locked him up in a particular Asylum cell. After not many years, NightError is forgotten by everyone, even by the multiverse. As such, he ended up in The Hole, a sort of vacuum, which the multiverse turns and disremembered ends. (The very existence of whoever enters The Hole; is forgotten by everyone in the multiverse). Being the first living thing to set foot in The Hole NightError comfortably sweeps into total harmony. NightError relaxing at peace, this allowed NightError to seize control of The Hole, deciding what and whom to enter and exit, thanks to his ultra-determination (contained in the soul). The Hole made NightError find his ultra-determination, allowing him to acquire it.

Taking advantage of the control he has, NightError leaves The Hole and finds himself, after a very long time, back in the multiverse. A Hole is a placed practically isolated from everything this, caused his returned impact on the multiverse, catastrophic to himself. NightError being made apart with nightmares slime, it tends to absorb hatred. Therefore, coming into direct contact with the negative feelings of an entire multiverse corrupts it, and sending it haywire, inducing insanity, making him end up destroying other beings.

Once immense beings cease to experience negative feelings, he returns to normal (therefore ultimately determined), seeking repentance of his actions. He wishes he could go back, and so, in front of him, a button appears, the Omega Reset button, a power that can reset an entire multiverse to its origins. After the Omega Reset, NightError returns to when he received his soul in The Hole.

He decides to stay there, keep an eye on the alternate universes, and intervene with the Omega Reset when necessary. He then made a few trips to return to the parallel universes and learned over time to manage hatred corruption.

NightError! is a black Error Skeleton with yellow strings coming out of his one eye. He has Red hands with yellow fingers like Error's hands and has tentacles like Nightmare's (However they randomly glitch). He wears black slippers and wears black sweatpants with a dark blue-green vertical stripe on each leg. He wears a black/Blue hoodie with red/yellow drawcords. He randomly glitches white and yellow pixels. He has dark blue/green teeth and has yellow/blue markings oh his face that almost reassemble "tears." He has the words ERROR appearing randomly all over him.

NightError usually has a neutral and curious behavior towards the external multiverse, whose dynamics he tries to understand. He has pungent comedy like most typical of sans although, he tends to lean towards Black Humor. He approaches new people in an invasive way only when he has to, as NightError usually tends not to talk to those he doesn't trust. He is very responsible exceptionally when it comes to bringing the multiverse back to normal in case of real danger. When the balance of the multiverse is disturbed, Night Error will do everything to fix the imbalance that has arisen, even if it's broken beyond repair. He also loves sushi.

Error Bones: Can turn blue or orange, and are both glitchier and stronger than Classic Sans's bone attack.

Tentacles: Can attack with the six appendages on his back.

Omega Reset: He can reset the alternate universes. (ONLY IN BALANCE DISTURBANCE SITUATIONS, so when everything is lost)

He hates them because one always tries to overwhelm the other and what he considers their whims always end up messing the Multiverse.

NightError loves to observe her and sometimes speaks to her, so he will not feel all alone. He feels akin to her.

He hated NightError when he did nothing to prevent Ink from breaking his soul. Later, after Asylum and The Hole, he forgot about the resentment but no longer considered him as his father (nor his creator). 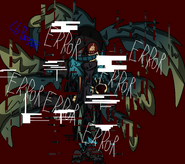