Note: This AU may contain some swearing due to Underfell being an edgy Alternate Universe.

Neutral Evil (before being "reformed")

True Neutral (after being "reformed")

Alive (in Genocide and Underverse 0.04, dead)

Talking about his feelings to anyone, Humanity, Calling Papyrus "Boss", Frisk (formerly), Ketchup

Fell Sans, also known as Cherry or Red, is the main antagonist of the Underfell AU and the brother of Papyrus and takes on a similar appearance to the Sans of Undertale. Sans is a skeleton, presumably born in Snowdin, who is pushed around by his younger (albeit significantly larger and more durable) brother Papyrus, to the point of being forced to call him "boss." He is verbally abused by Papyrus and is forced to obey his brother's commands. Some differences about Underfell Sans is that his eye glows red. He is destructive, unlike his Undertale counterpart.

Fell Sans looks very similar to his UnderTale counterpart. He is a skeleton with sharp teeth, having his top-left canine being gold (definition of canine: a pointed tooth between the incisors and premolars). He is slightly taller than UT Sans. Fell Sans wears black sweatpants like UT Sans. However, they have a vertical yellow stripe on each leg. He wears red/white sneakers with yellow socks. He has bags under his eyes (due to lack of sleep). His pupils consist of a red color, as well as his bad, or great, time eye. Sometimes he will keep his glowing red eye as his regular appearance. He wears a red sweater, unlike UT Sans' white T-shirt. He wears a heavy black coat and has a golden zipper on it. He has white fluff on his hood. Fell sans is often sweating due to being hot from his big coat (Black clothes can attract heat). He has sometimes shown to have a crack in his skull (how he got the crack on his skull is unknown). He is shown to wear black fingerless gloves.

Fell Sans, much like every other monster in Underfell, is a darker and edgier version of the original Sans.

Sans can be harsh at times. He is not into puns that much, but he likes knock knock jokes. He often gets tired, but not flustered. He has an allergy to cats. He strives to be cool and collect. Fell knows the timelines and resets are shared among all AUs (excluding some interpretations of UnderSwap), but hides it very well. Although, He still believes in the "Kill or Be Killed" motto, like most of the monsters in the underground.

Fell Sans makes appearances in both of the UnderTale Comics, where Sans appears as one of the three bosses along with UnderFell Papyrus and UnderFell Asgore.

Judgement Hall - In the True Pacifist timeline, Sans keeps an eye on Frisk. He hates how Frisk keeps being nice and waits at the Judgement Hall. This fight would be similar to the boss fight in UnderTale, only more brutal, harder and deadly. Once Frisk managed to 'reform' Sans, he refuses to fight anymore.

Omega Sans - After their encounter in the Judgement Hall in the Genocide timeline, Frisk will still have to encounter Asgore. As Frisk and Asgore are distracted, Sans sneaks in and steals the human souls. After Frisk spares Asgore, Sans kills Asgore with his Omega Gaster Blaster (or maybe just confront them). He is now a God-like monster, containing the six human souls. He admits that he doesn't want to fight Frisk again, but refuses to let monsters go free. Now that he is a god, he will now be the ruler of the Underground instead of Asgore. He first plans on destroying humanity himself, but Frisk attempts to stop him. Sans then let out an evil chuckle and calls Frisk an idiot and the fight begins. This fight would be similar to the fight in UnderTale with Omega Flowey and Asriel Dreemurr, the God of Hyperdeath.

(unsure if that is Canon) ^

Sans has a personal hatred for Frisk and wants nothing more than to kill them. After their encounter in Judgement Hall, Frisk managed to 'reform' Sans. Sans then said he wouldn't harm Frisk any longer, as he now sees the purpose from what they have been doing since their arrival.

Sans first assumes that Frisk is weak and will eventually be killed. After losing his brother, Sans becomes "broken". He doesn't feel hatred since, in this world, monsters follow the motto "kill or be killed." Sans then goes to the Judgement Hall and waits for Frisk. Instead of fighting or threatening Frisk, he instead thanks Frisk for believing in the motto. Sans is reluctant to fight Frisk because of how powerful Frisk became. Sans tries to calm Frisk down but to no avail. When it is clear that Frisk will not back down, Sans begins to fight with his full strength, but in the end, Sans dies after 24 rounds. During the fight, Sans loses his fear of Frisk and comes to terms with his imminent death.

They share a very tense relationship. Papyrus is the brother of Sans. Their relationship is based almost solely on conflict and pain, much to the point that Papyrus forces Sans to call him 'boss' rather than 'bro', which he hates. They rarely do speak to each other as equals and Papyrus always speaks before him and is attributed to the merit sans what has dong among them of the puzzles that are seen in Snowdin. It is said that Papyrus is only so hard on him to keep them both safe. Sans gets anxious near Papyrus. Sans wants his brother to at least take care of him, even though some speculate that Sans battered Papyrus as a child.

Sans hates Flowey because of his Frailty.

Things that are Non-Canon (Fanon)

(Remember that not all these pictures belong to the same artists) 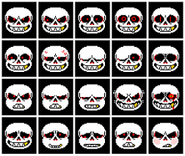