This article is an old canon of Fresh. You may be looking for Fresh of Lucidia.

Peach (BFF) (in some universes, Error and Geno as brothers, his Momma CQ, and best friend PJ)

Megalovania - MLG Airhorn Remix
YOLO!
The Song That Might Play When You DONK Fresh Sans
The Fresh Sans of Megalosecret (Sim Gretina Remix)https://www.youtube.com/watch?v=klK40jjOuI8

Ability to sensor Profanity, can not get erased by
Error! sans

(Also has a minor Cameo in Underverse 0.3)

They, them
he, him

A Parasite controlling a Sans

Fresh is a parasitic monster that takes someone's soul as a host to survive.

He was created by Crayon Queen on Tumblr.

His outward clothing usually consists of some broseph brightly colored shirt, sometimes a multicolored hoodie and orange basketball shorts. He always wears heelies and some kind of hat and is usually seen with a skateboard.

Fresh was redesigned for the upcoming original webcomic Lucidia. Lucidia!Fresh is almost always seen in a bright cyan and purple windbreaker, a pink shirt, a pair of green and blue zip-off pants, a propeller hat, and his heelies. He also wears a bright red SWAG bro fanny pack.

The only staple that continued was his pair of bright yellow and cyan YOLO glasses. (the words on his glasses change depending on his mood) The glasses are mainly to hide the eye sockets of his host, which display the soul of the host in the socket. The soul will always appear cracked due to his parasitic nature of feeding off the life energy of his host, which is a dead give-away to his true self.

He hides this part of him most of the time out of self-preservation.

This is just what his bodies are wearing, however. Fresh is a parasite that is controlling a Sans. True!Fresh is a small, purple, tentacle-like creature consisting of a large red 'eye' with a yellow ring around the 'eye'. The eye is surrounded by teeth. The main parasite is almost star-shaped because it has four tentacles.

He Also has his soul in his eye this makes it harder for his enemys to kill him though. It is also in his left eye to hide the eye sockets of his host and the soul. I am not a 100% sure if him possesing a host actuallly means he posses another body but, I beleive that he posseses there body as well as there soul as he does look like a tentacle parasite:

Fresh is completely lacking in emotions and incapable of love (And even though this isn't canon, people ship Fresh and PaperJam, a "mistake" from all of Ink!sans and Error!sans battles.) He has a lax attitude and tends to be a very 'go with the flow' type of personality. Most of this is due to his lack of caring for basically anything. He has an extreme baseline fear of 'not existing', so he continues to 'survive' by moving from host to host. He does not kill his victims, preferring to leave as many bodies 'open' as possible for possible infection later. Fresh is very 'PC', he digs PSA's and is not a fan of swear words, as he will censor people almost always. (especially Fell Sans) He is also woefully oblivious of his own words and actions sometimes, he very much likes to be a 'totes rad broseph' but is blunt to a fault (due again to his total lack of caring, and therefore empathy) and will blurt out the truth before he thinks of what he's saying.

Fresh has the power to censor Profanity by replacing them or part of the word with his fresh words I.e. rad, funk, etc. [error is scared of fresh] He also has explosive Furbies that are carried in his fanny pack. He attacks rad by hitting at them with a whiffle bat.

Despise being fresh, he cannot be erased from Error!Sans, even if he tried.

Fresh has many different interpretations and developments over a variety of creators.

Askin' Fresh has their own Fresh role-play blog that has developed entirely in its own direction.

A 'Fresh 2.0' popped up after a very specific role-play incident.

@under.fresh was a blog created around the designs and concept of UnderFresh but used its own plotline. The page and story have been (seemingly) indefinitely inactive and ended since June 9, 2016.

And finally, the many, many versions of Fresh drawn by Blog. These include FreshPaper comics, a vampire AU that features Suave, a servant character modeled after Fresh, PJ's daycare that includes a secondary Kid!Fresh design, and a high school AU.

Fresh himself has not appeared in any work as of yet by the Crayon Queen herself, so there is very little canon Fresh to go off of. This blog IS the official Fresh blog, but ever since Fresh has been decided to be moved to original works, and on account of the creator being an extremely busy individual, the blog has not been updated.

Fresh's true story is to be revealed in the future work of Lucidia. 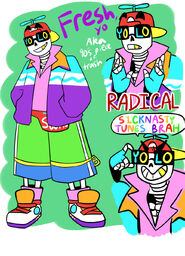 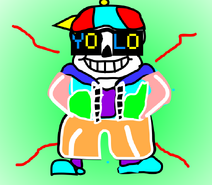 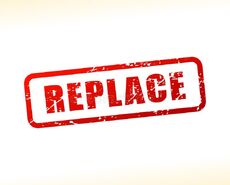 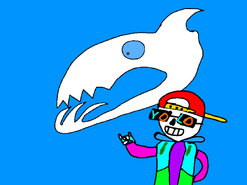 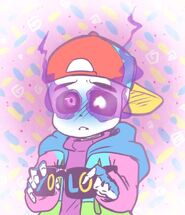 (For anyone who wants to use Fresh Lingo, use this translator!)