View source
watch 01:36
We're Getting Mutants in the MCU - The Loop
Do you like this video?
Play Sound

This is a fell AU

King of the underground

Sans is the ruthless ruler of the Underground and the major antagonist of the Storyfell universe.He is said to be very rarely lazy than he was before when he sees you he wants you kill you with out a peep.

with everyone wanting to kill him he stays in the castle and his home and legends say if you go in his castle you never Return.Template:Dusty'sCharacterTemplate

Before the two children died, he was known as the 2nd Nicest monster, but then he changed and became evil. He killed many people to show how we wanted the underground to be. Sans used to like Papyrus, now he doesn't even care for him at all. He's the one who banished him.

Sans in storyfell has a grey crown, a scar on his left eye, a black cloak with fur on top, and silver chest-plate. He wears old torn red slippers. He has sharp teeth, and one of the teeth is gold.

Sans has menacing bones and his gravitational power and his gaster blasters are even harder to dodge then before.

Same as storyshift but he says a fewer less things and doesn't give you time before you can start the battle.

Text: birds are hawking, flowers are dying, you feel like he's going to have a GREAT TIME

His fight is most likely harder then the original Storyshift sans due to him being a fell AU. He most likely has the same abilities but with a bit more damage. 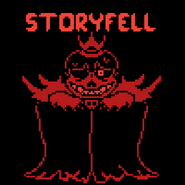