This is a guardian of the timelines?

You're okay in his sockets.

"talk about weird. "
– Sentinaltale Sans upon seeing a version of himself

Sans is a main character in Sentinaltale. He came from a pacifist timeline and despite all that he has gone through, all he has lost, he still makes jokes; if only to keep what little sanity he has left. His AU name is Serif.

Much like Classic he has a blue hoodie that he wears, he has a pair of cut off gloves that he found during the many different trips through the pacifists timelines to find and deal with Chara.

He doesn't trust outsiders easy. Especially if the other happens to be human. He makes jokes to ease tension, the worse the tension the more jokes and puns he will make. Using them to also deflect questions directed at himself and his own well being. He can be stubborn about not admitting to needing help or about talking about his nightmares.

He can teleport, but is limited to only teleporting to places that he has seen before and though it does not usually take up a lot of magic, he can only teleport about 20 times per day before he needs to rest to regain enough magic for another trip. He uses both bone patterns and Gaster Blasters for his attack. His special attack allows him to stall during a match by doing nothing on his turn.

His lost brother, he trusts his judgement on many things. The two having worked as royal scientists before the accident in the Core.

He is good friends with her, however their relationship is strained due to Frisk coming from a timeline where she was in love with a version of him. It's usually more strained on her end than his.

There's no love lost here, or LOVE. Sans was nearly killed by him and absolutely hates him for destroying his world, his friends and his brother.

He doesn't particularly trust her because she's human. He knows she's hiding something, and that makes him mistrust her all the more.

He thinks that Inky is a little odd. He finds the other Sans' choice of attire and companion rather questionable. 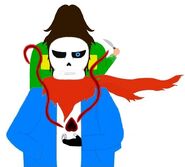 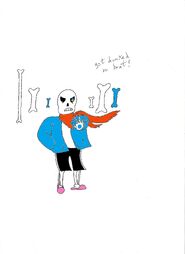 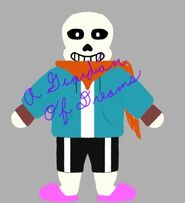