"This creature is definitely in the wrong time and space!"

Sketchy - 12G
"A barely described picture"
Flattened - 16G
"Color has been crushed on the paper."
Cell - 24G
"Helpful bacteria adds shadow."
Shady - 30G
"This picture fell off of a truck"

So Sorry (real name, Samael D. Butterdragon) is a hidden enemy the protagonist encounters in the Art Club Room. He was a bought-in character during the Kickstarter for the game.

Much of So Sorry's artwork involves fat furs and vore.

Wanting to support the development of the independent video game Undertale, Samael donated 1000$ for its Kickstarter, getting the "Fan Troll" reward.

For this reason, his fursona appears in the video game as So Sorry, a hidden boss fight. He is the monster that can reward the player the most money in a single fight (300G) of the whole game. His boss fight is non-canon to the video game story and looks more like an Easter egg. His in-game name, appearance, and design of some of his attacks as So Sorry were his ideas that the game creator Toby Fox exploited and developed.

After the barrier break, Samael took up a career in public broadcasting, happily edutainment monsters and humans across the globe.

While at the Underground, Samael cheer up Asriel by drawing a pictures of his family.

This section is a stub. You can help 735q4e87 Wiki by expanding it. 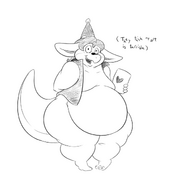 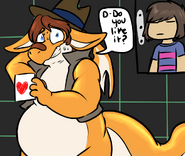 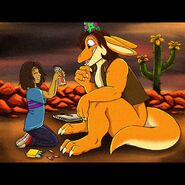 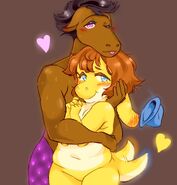