735q4e87 Wiki
Register
Don't have an account?
Sign In
Advertisement
in: Non-existent AUs, Pages without a standard infobox, AUs,
and 4 more

PS1CHO
Timetwist like any AU roleswap has character replacements. This AU from neon-pulze was made a long time ago and has not received any popularity.

Sans does not get into the dungeon and meets a girl named Alice. Soon she is killed, and sans takes her soul. Then he falls into a dungeon, and papyrus finds him and helps him so that they become a family. Frisk just wants to help, but in the end everyone hates them. Frisk decides to commit suicide by going to mount Abbot. Jumps and 't die. Then frisk realizes that it can be reset. Reset and attempt to die failed. And so reset, reset, reset and reset until they all get tired of it. Goes and finds sans and papyrus. They help them to bring them into the house to meet my parents and take the Frisco as a member of the family. Everything was fine, and they were having fun eating pumpkin pie. But then sans got sick, and every day she got worse and worse. Both brothers died on the same day. The king got angry, saying that it was all the fault of people (after all, everything was fine before Frisk came), and to get to the surface he needed the souls of people and he wanted to kill Frisk but stopped the king and told Frisk to get human souls or they would die. tried to persuade but he kicked her out and Frisk helped her. Soon took Frisk to the lab where she joined Her soul with the soul of the monster and it was very painful to stick different syringes in them. Tried to introduce magic to them with this magic, they almost killed an employee. A few years later, Frisk and designed. Then the core was in a faulty state and almost falls and Frisk almost saves her as she thinks of revenge for all the suffering and then she throws her life away. Frisk saves and found a house in . They are preparing the for the Royal guard. 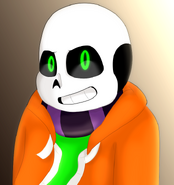