735q4e87 Wiki
Register
Don't have an account?
Sign In
Advertisement
in: Sans, Skeletons, Other forms,
and 5 more

"get comfortable"
– Sans' dialogue after transforming into Ultra Sans.

Ultra Sans is the gargantuan form of Sans. This boss is easy to beat. This Fan-Made AU is made by A Huge Pancake.

Ultra Sans is just Sans but much bigger (and heavier) than his normal self. His skull is cracked with a creepy smile. He has no body because it is hidden due to its monstrosity size. He as well has big arms and hands.

Because of his colossal size, he can move and break fight boxes and buttons.

He can control bones. and resize move them to his will and use.

"you'd be dead where you stand"

"EXACTLY WHERE YOU STAND" 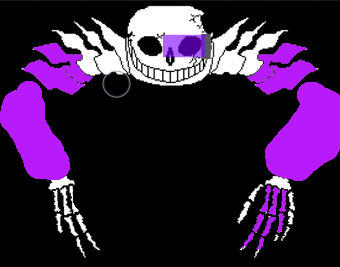