735q4e87 Wiki
Register
Don't have an account?
Sign In
Advertisement
in: Non-existent AUs, Articles that need to be improved, AUs,
and 6 more

poody_blue (Lead)
Ethan Harper
Starlane
Purrsum
Artem-Nesterov / ArtemART
Mrky
Ray
Blaize.Mayes
Undertale: The Otherground, or UTTO, is a spinoff/sequel (gaiden) fangame which explores a second Underground beneath the waves of a sea. The project was at first a collection of related projects (Demolitale, The Otherground and Demolitale Brown) but were merged into one consecutive story during the reboot by poody_blue (previously MyHiddenThomas) and Ethan Harper. The story follows the human, Louis, as he searches for someone he lost down in the Otherground, and is aided by some humans who live beneath the surface with other fallen humans.

Louis is a human from the surface who enters the Otherground in search of someone they lost dear to them. Louis has a slingshot, which he uses to solve puzzles or trick up monsters. His soul is the red soul of 'Determination' and are the main protagonist of the story. Themes: A Lonely Soul (For all party members).

Renée is one of two twin siblings who live in the caverns of the Otherground. She was born in the Otherground. Renée's favorite thing to wear is her heart shaped label pin. Her soul is magenta in color, and is the soul of 'Leadership'. This 'Leadership' allows here to coordinate team attacks in the game.

Sunny is the other twin sibling who lives in the Otherground. Like his sister, Sunny was born in the Otherground. His soul color is yellow, the attribute of Justice. His flute he got from Pierre allows him to preform magic. He has been shown to use fire magic, and have some ability of healing magic, through the non-canon ask Sunny blog.

Hui is the oldest of the four protagonists and bears the soul of Innovation. Being the commonest trait of humanity, Hui doesn't have any WP. Instead, Hui has is physically stronger than the rest of the group and serves as the group's technician. Having lived in Mongale for quite a while, she bears a lot of knowledge about the sunken isle. Hui builds various cool gadgets and uses her abilities to help the group past mechanical hurdles.

Pierre the Travelling Merchant is the first major character in the story and will appear periodically throughout the Otherground, offering for a high price his 'special skills' to help protect the characters. He is the only officially known main character for the game. Themes: Charlatan (V2).

Rosmarus, a scientist in the Gate. He's a fat, fluffy walrus with huge self-esteem and ego. By biological design, he's handicapped in that his hands don't work very well as hands, so he used technology as a replacement, explaining the floating mechanical hands. Rosmarus will fill a role similar to Martlet in Undertale Yellow in representing the rest of the UTTO fangame beyond the demo. Some of his actions have some impact on the events of the game, even in the demo portion, but these are yet to be revealed. He is also the adoptive father of Hui.

Mira is a character only known from their theme and their theme file name. Apart from their name and probably relation to mirrors and/or ghosts, not much is known about them. Themes: Lonesome Reflection.

Queen Feil is a character only know from her themes. Apart from her name and title, not much else has been revealed about her. Themes: Queen Feil, Maelstrom.

The Island of Mongale (otherwise known as The Otherground) is the setting of UTTO. Mongale is inhabited by humans and monsters a like and bears resemblance to a scandanavian climate through it's cold and water filled environments. Forests, high peaks and mechanical industry are all found across the island, with a surpless of towns and cities scattered across the map.

The Tutorial area, or area 0 is the first part of UTTO. Not much is known about what the area will be, except that it will function to teach the player the basics of the game to come.

The first true area of UTTO or Area 1 is an unknown area. Not much is known about the area except that it is the first.

The second area of UTTO or Area 2 is the last area to appear in the game's demo. What is known of the area comes from the title of it's theme, implying a rainy location, potentially a mountainous area. It is also one of the areas has been youngest in the game's creation and is the only area to not source at all from any previously procrastinated area from the previous Demolitale series. Themes: Tear-Stained Heights

Haven is a town in Mongale made up of humans who fell into the Otherground or were born from those who fell down. Themes: A Safe Haven.

Not much is known about this area, only its name and that Rosmarus can be found there and a potentially mechanical theming. 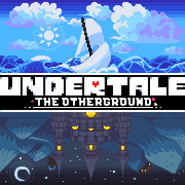 Hui, the final and Fourth Protagonist 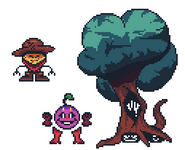