Unikittytale is a crossover AU in with Unikitty! characters as the monsters, and Mixels as the humans (go to my profile page and look for Mixels Wiki).

Main and side characters 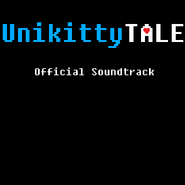