Wish Sans was born with a shattered soul. Wish Gaster created something called a Soul Locket. It was made for Sans shattered SOUL and part of it was made up of a human soul(Wishtale Chara's soul but Wish doesn't know this). He never has been fond of touch and developed a fear of touch early on.

Very few could touch him, but they would need to let him know before touching him. If someone were to touch him without his knowledge, he would react in self-defense and could dust/kill someone accidentally. Sans also never liked meeting new people due to his athazagoraphobia.

Though after thousands of genocide runs in a row, he decided to do something different. In desperation, while dusting he grants his own wish to never be able to die. He did it so he could stop the genocides, but he forgot about the rule of equal exchange.

That wish ended up glitching the whole AU out of existence. Wish was then trapped in an endless darkness of seeing genocide after genocide happen before his eyes, again and again. This made him fear darkness and monster dust. When the nightmare was finally over, he woke up in the DoodleSphere.

A white skeleton with two black and one yellow stripe that looks like they are coming out of both eye sockets. His pupils are three or two (it changes randomly and Wish doesn't even understand why) yellow circles with a white dot in the middle. Wears a blue jacket with yellow at the end and yellow balls above the yellow and two yellow stripes under the elbow with yellow balls as well. He wears light blue half gloves and a purple shirt. Has black pants with a purple stripe going down the side of each leg. Wish wears the light blue Heart Locket under his scarf. His scarf is a dark grey.

Wish is very anxious all the time. He wants to help everyone and doesn't like to choose sides when there is a conflict in a multiverse. He understands balance and strongly believes in what he thinks is right. He doesn't like fighting but he will fight if it's the only choice he has. He has Achluophobia, Haphephobia, Monophobia, Athazagoraphobia, Sociophobia, Claustrophobia, Amathophobia, and Atychiphobia.

Fear of the dark

How Severe Is It/How Much It Affects Him

It is very severe. Wish can't standing being in a place with no light. If it is dark but there is some sort of light, he will be fine but feel extremely stressed and anxious at all times (more than he is normally).

Wish got it when Wishtale was glitching from existence in a pitch black void for an unknown amount of time.

Fear of being touched

He is extremely fearful of touch. He would only let those whom he trusts touch him but they would have to tell him or ask him if it was alright to touch before physically touching him. If someone were to physically touch Wish without letting him know ahead, he would automatically react by attacking whoever was touching him and potentially kill whoever it was by accident.

He got it when he was very young and in Wishtale. Due to his soul being shattered, he was more sencitive to damage. So he became extremely fearful of touch.

Fear of being alone

It's not as bad as some of the others but it's still pretty bad. He mainly starts to freak out alone if others just left him and forget he was there or when his negative thoughts get to his head.

He got it when he was alone in the black void.

Fear of being forgotten

It's like his monophobia but a bit worse. It mainly happens when he thinks about when he is going to leave a multiverse or after he leaves a multiverse.

He got it when he was alone in the black void.

He mainly freaks out when he has to meet someone he has never meet before in any other multiverses. He mainly fears embarrassing himself and crowds.

He got it in Wishtale.

He can't be in a too small of a space for over five minutes before he freaks out entirely.

He got it in Wishtale.

It's monster dust that he fears, not so much regular dust. He has to look away if a monster is dusting so he doesn't make anything worse.

He got it when the nonstop genocide runs started happening but mainly took effect when he was stuck in the black void seeing his friends and family dusting in front of him over and over again.

It mainly happens when he knows he has to do something and he starts thinking negatively about everything.

Wish likes to draw everyone he meets and sees in a sketchbook from Wishtale that his Papyrus gave to him.

The sketchbook was made by Wish Gaster and Wish Papyrus gave it to Wish for his 6th birthday. The sketchbook looks like a normal sketch book but it actually has an infinite amount of pages and Wish can look up any page he writes in.

Wish tends to go to random AUs and watch them play through timelines, trying to stay out of sight (he's not very good at that). If he is seen by anyone in an AU that doesn't know about other AUs, she leaves and writes a note in the Doodle Sphere for Ink to take care of it (he doesn't know what to do so he assumes the Protector of AUs knows what to do). She draws all the characters in her sketchbook and writes notes about all the characters by the drawings he makes.

Got that power by being tested on in his au

Powered by all the hope in the multiverse Wish is in at the time.

Powered by all the hope in the multiverse.

Uses it as a final last resort.

Powered by all the hope in the multiverse.

Nothing can get in or out unless Wish allows it or if the shield is very weak or there isn't much hope in the entire multiverse.

Every wish has an equal exchange.

A wish can be granted at one time but happen at any other time if the wish doesn't say when.

If a wish doesn't say how it should happen then it could happen in any way.

He can't pin point who is saying a wish except if he is near the person (has to be seeing them or know of them) or he knows the person wishing personally. 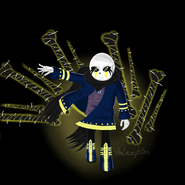 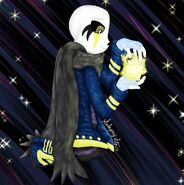 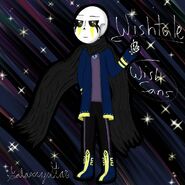 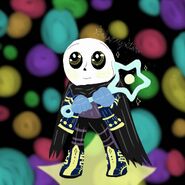 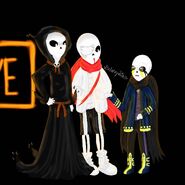 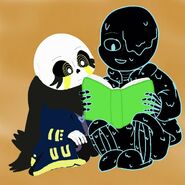